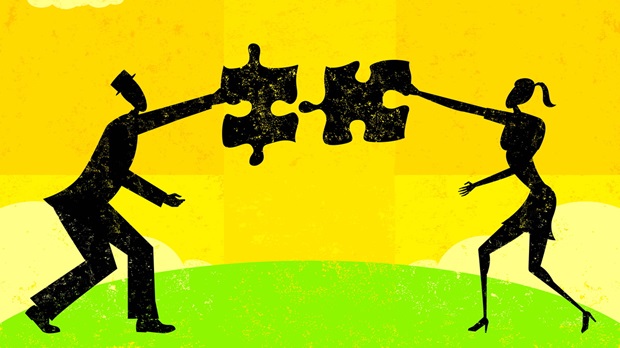 God uses what we have in common to attract us. Then he uses our differences to define us if we are willing to endure! Every relationship goes through five stages. The initial connection is full of potential and void of disappointment so it’s a GOOD DEAL. When the potential is challenged and a disappointment emerges it’s a BAD DEAL. When the disappointment isn’t resolved by the other person the way you expected it’s a RAW DEAL. It’s at this time that we have to make the decision to give up or redefine our expectations concluding with either the NO DEAL or the NEW DEAL.

This progression takes place in a church or ministry relationship as well. You decide you want to sing on the worship team and it’s a GOOD DEAL. You find out the practices are on Tuesday nights and it’s going to be work – BAD DEAL. Somebody misses and you’re there but they get the solo part the next week – RAW DEAL. You have to decide if you’re going to sulk and quit = NO DEAL or if you’re going to truly do this as your ministry unto the Lord and not man = NEW DEAL.

We are all different and we all carry different points of view. When it comes to marriage if we’re not careful we’ll decide that our differences are a weakness when it actuality they are strengths! A mother is likely to caution a child climbing on the monkey bars while a father is likely to challenge the child to climb to the top. Both perspectives are important for the child to learn. One is not right while the other is wrong. The two perspectives together are complete.

Both have intimate needs but they go at it from two different perspectives and together they are complete. It’s a vicious cycle that’s either defining or a weakness.

The lesson here for all of us is to be our best we must work to be a student not a critic. We don’t have to destroy others to validate ourselves. Even in our differences may we never forget that the fruit of the spirit should be showing up in every person in every situation when we’re surrendered more completely to Christ.

Eph 4:16 From him the whole body, joined and held together by every supporting ligament, grows and blds itself up in love, as each part does its work. NIV

The NAS says, “each joint supplies.” We must realize that the devil hates our connections and relationships because each joint supplies. Connection brings provision. Sometimes it’s just one connection that takes you to the next dimension of life, work, ministry, marriage, etc. We must learn to value and appreciate relationships. Appreciate means to increase in value. As we value people we discover more about our purpose in life.

1 Pet 4:10 Each one use whatever gift he’s received to serve others. NIV Gifts!

On 16th August , 1977 Elvis Presley, at the age of 42. died of obesity and drug dependency. According to his friends he was an unfulfilled and unhappy man. Wife, Priscilla, interviewed, said: “Elvis never came to terms with who he was meant to be or what his purpose in life was. He thought he was here for a reason, maybe to preach, maybe to serve, maybe to save, maybe to care for people. That agonizing desire was always with him and he knew he wasn’t fulfilling it. So he’d go on stage so he wouldn’t have to think about it.”

It’s more tragic to be alive and not know why than to be dead and not know life. A lot of people stop living long before they’re buried.

God give us wisdom to selflessly appreciate (increase the value) the relationships you have entrusted to our care.