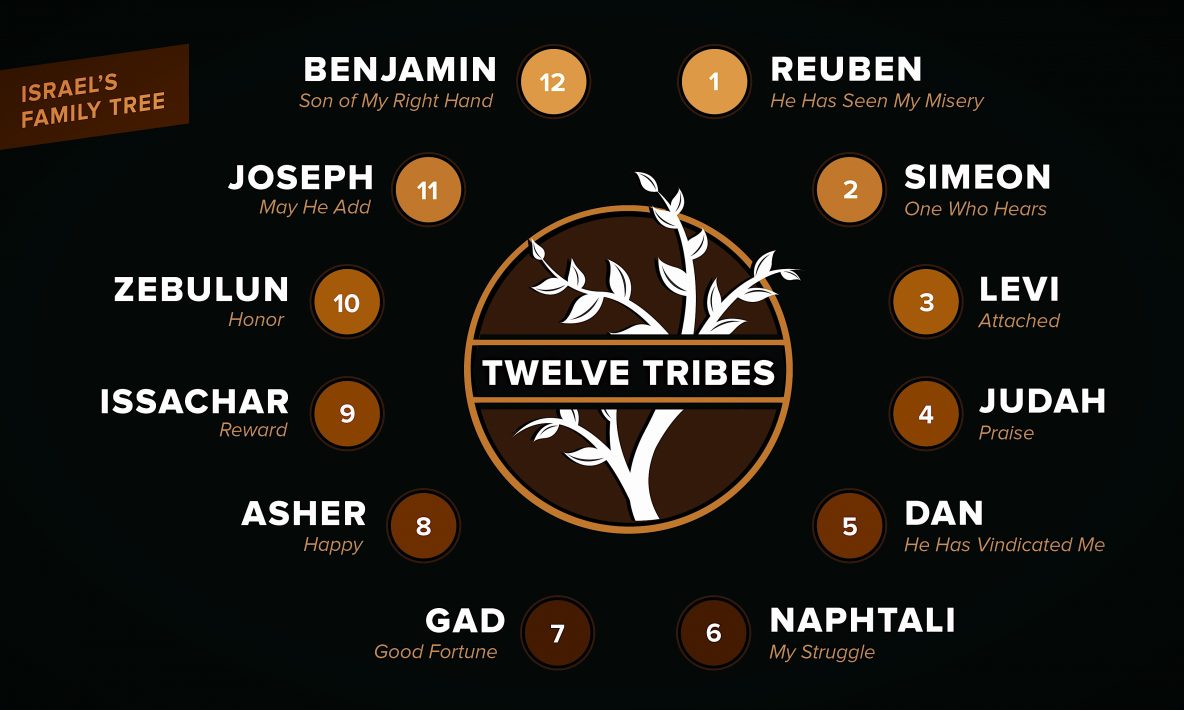 God takes just a man and makes him a just man but he is still just a man. Authenticity and transparency are critical parts of what God desires from us in our pursuit of Truth.

Gen 17:1-17 When Abram was ninety-nine years old, the LORD appeared to him and said, “…You will be the father of many nations…6 I will make you very fruitful; I will make nations of you, and kings will come from you…17 Abraham fell facedown and he laughed… NIV

One of the greatest enemies to our soul is the enemy of self-disqualification. God has gone to great lengths in His Word to address this in many ways. One very fascinating way is through Israel’s twelve sons. At first glance you simply see the names of children born into his family. Further evaluation of the progression of these twelve sons tells a fascinating story.

Amazingly the birth of the twelve sons of Israel qualifies for possibly the most dysfunctional family in the history of the world.  Jacob wanted to marry Rachel but was tricked into marrying her unattractive older sister after working for seven years. He then had to commit to seven more years to be given the love of his life. The animosity, jealousy and pain of this situation must have been beyond our wildest imagination.

Leah, who was not Jacob’s first choice, conceived first and gave birth to Reuben, then Simeon and then Levi. This entire time Rachel could not conceive so she provided a maid to conceive on her behalf named Bilhah. Bilhah gave birth to Dan and Naphtali before Leah decided to get her maid, Zilpah, in on this situation now with four women trying to have a baby by Jacob.

A closer examination to this dysfunctional progression reveals that God was actually writing a story through it all. The reality that God could write a story in this very complicated family situation gives us all hope that if he can use them then certainly he can use our dysfunctional situation. The names actually have meanings that tell a story.

Reuben:  He has seen my misery

Simeon: One who hears

Dan: He has vindicated me.

Joseph: May he add

With Rachel’s last breath she named her son Ben Oni meaning “son of my trouble”. Jacob stepped in here saying no he’ll not be known for misery and trouble but he’ll be known as Benjamin which means, “son of my right hand.”

Take a look at the message of these names in progression and how it tells our story of finding Jesus. He saw our misery. He heard our cry. We became attached to him. We began to praise him. He vindicated us against our enemies. We struggled at times in the process. Good fortune came as we did not give up in times of struggle. Happy were we when rewarded and honored for our faithfulness. God added to our lives through Christ. Notice this very interesting concluding son. He was first named Ben Oni by a suffering mother who knew death. The father changed this name saying he won’t be known for suffering and death but rather he’ll be known as Benjamin, which means son of my right hand. Just as Jesus would suffer and die. The Father would raise him from the dead and seat him at his right hand. This is also where we are now seated in Christ. We are part of this family tree! We are God’s family, the family of the forgiven!

If you’ve ever stumbled you know what it is to be embarrassed from something unexpected. God is so amazing he turns the times you stumble into a beautiful dance to inspire others! It is hard to imagine but He can do it every single time taking any situation we surrender to him and uses it beautifully if we allow him to do so.

When I traveled to Africa I had to get various shots. One of those vaccines was yellow fever. I actually had the fever briefly as a result of the vaccine. You know why? A brief exposure to what would normally kill you creates strength within you to conquer that sickness.

The devil wants to bite you and take control of your life. But Jesus, who knew no sin became sin, 2 Cor 5:21, so he could become the anti-venom to cure you from the venom of the devil!

We follow the example of Jesus when we embrace our past as part of his plan to produce an anti-venom in our lives that can cure the lives of others. The problems and the pain of your past become purposed when you place them in the hands of your God!

Sometimes God redeems our past by surrounding us with people who need to hear our story so our past never becomes their future. We can find encouragement and strength even in our failure and in our weakness. In our weakness we become strong and it is not merely strong enough to be victorious but strong enough to help others!

Jesus was suffering and dying while Peter was denying him, cussing to prove it and the cock began to crow but God’s eye never left him. His mistake did not change the fact that God had chosen him to be the one who would give the inaugural address at the birth of the New Testament church. Why would God do that? Because the venom produces anti-venom in the kingdom of God.

Have you been bitten by the devil? We tend to look at our past incorrectly. God wants to redeem our past by surrounding us with people who need to hear our history so it never becomes their destiny! All of your suffering and all of your pain almost killed you knocking you to your knees making you secretly feel worthless – God wasn’t trying to kill you. He was making a cure out of you!

Because you survived you built up an immunity to whatever others need from you right now! If you survived abuse, willful sin, mistakes, rape, betrayal and even pain beyond comprehension. God left you in the earth to be a cure for somebody else!

Stop viewing your past as a reason why you can’t be used by God. It’s the reason you can be used by God in exactly the way He’s purposing to use you!

Sometimes God redeems our past by surrounding us with people who need to hear our story so our past never becomes their future.